For fourteen years we’ve been watching Sam and Dean Winchester fight for free will and against evil. They’ve hunted ghosts, monsters, angels, and demons, and somehow always pulled it off. Now, as the series is coming to an end, we’re back at the beginning: brothers fighting forces much bigger than themselves, all to save their family.

A lot of the things I’ve been reading about the final season have left me somewhat hesitant. The relationships the boys have with each other and their chosen family have always been, for me, the foundation and rock of the show, and seeing them fractured and broken for any extended period of time makes me nervous. Not because I don’t love the angst (I do), but because it makes me wary of the common final season trope of “Fight, Forgive, Farewell” where once the relationship is repaired, one of the characters inevitably dies. And I’m not ready for that.

On this tentative “fractured family” footing is where we begin this season (after a great Road So Far montage played to Bob Seger’s “The Final Scene”): with TFW 1.75 fighting the not-dead-but-not-zombies right where Chuck left them. It’s dark and chaotic, but eventually the boys, Cas, and Jack’s body make it to a mausoleum and lock themselves in. Now it’s just a choice of being torn apart by not-deads or starvation! Except Cas, of course, which seems small comfort to at least one human in the room. While the boys bicker and brainstorm for a way out, Jack’s body pops up to say hello! Obviously, this isn’t Jack. There generally isn’t any coming back from “eyeballs burned out” unless your name is Castiel. Nope, it’s a demon! Like a good little kid on the first day of school, the snarky, cool demon introduces himself as Belphegor. Interestingly enough, he tells the boys he’s just a clock-punching lower level demon who wants to get back to his day job of torturing souls. 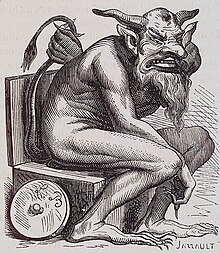 Belphegor “IRL”  from the Dictionnaire Infernal

Now, my extensive research (four minutes of Googling) into who the the demon Belphegor really is yielded the fascinating lore that he’s a fallen angel, one of the seven Princes of Hell, and is known to seduce people with laziness and sloth. Oh, and that he’s symbolized by dick. I’m choosing to believe that the writers decided to go a different direction with his character rather than, I don’t know, FORGETTING THAT CAS IS AN ANGEL and would recognize a fellow fallen angel for what he once was. Either way, I don’t really care too much because I love Belphy. Yes, I am sad Jack is gone, but it’s refreshing to see someone having a good time at the end of the world, and Alexander Calvert plays Belphy so well, I’m not even mad anymore.

Back to the crypt: Cas wants to kill Belphy tout de suite, but Dean convinces him to hear the demon’s plan before getting all stabby. Cas agrees, and Belphy tells them he has a way to get everyone out! And it’s super easy and convenient! He pops on some shades to cover his eye-holes (gotta blend!) and wham! All the not-deads are back to being dead. No, they’re not zombies or undead- they were just reanimated corpses filled by Hell souls and Belphy blasted them out.

Blasted souls gotta go somewhere though, so we pop in on some girls having a sleepover, rejoicing in parental divorce and the guilt-gifts that come with it, when one of them sees some weird creepy shit in the mirror. That’s right! Bloody Mary is back, and it’s not even brunch! One of the girls starts clawing her own face off which, understandably, causes the other girl to freak out and that is all we see. Yikes. Somehow they made one of the creepiest monsters they fought even worse. Looks like we’re digging deep with monsters this season, Bloody Mary was waaaay back in season one!

Meanwhile, in Baby, Sam is noticing that there is a suspicious lack of Apocalypse News online, which they all hope bodes well for the world until Belphy sasses “just wait.” There are literally billions of souls in Hell and just because the media is distracted by celeb drama, doesn’t mean shit. Lucky for them, though, Belphy knows another spell! One that can contain the ghosts in say, a mile radius! Let’s be sure to put all of our eggs in this one demon basket.

While the boys find a bloody Prius and are able immediately suss out that it’s the work of not only a woman in white, but their woman in white, we pop in on a birthday party that went somewhat awry, as a woman and her daughter run frantically through a bloodied house, trying to find somewhere to hide from John Wayne Gacy’s ghost. Fun Clown Fact: It’s considered bad form for legit clowns to have pointed edges like triangles, and to have the mouth wider than the eyes. Most clowns round the corners to appear less frightening. Either way, clowns are scary af, but it’s nice to know the real ones at least try. John Wayne Gacy’s clown makeup should have been a clue to what an evil piece of shit he was, but that’s for the True Crime fandoms, which is not here. We’re here for the fake, preternatural crimes, yo!

The boys head to nearby town Harlan to fake a gas leak and evacuate the town so Belphy can get his spell on. Sam talks to the sheriff, and Cas just goes with, unable to stomach the sight of Belphy. Belphy, for what it’s worth, is really diggin’ the hotness level of humanity these days, since the last time he was on Earth (and human, according to this lore) people were pretty gross and dirty… and they worshipped a penis-rock. Belphy proves his good taste when he tells Dean he’s gorgeous, and the elder Winchester is a lil bit flustered. It’s adorable. Belphy asks who “this” was while gesturing to his Jack suit, and Dean just says he was their kid. Awww.

Dean and Belphy head out to look for ingredients for this super cool spell that I can definitely not see backfiring on them at all, while Sam and Cas do a house sweep, looking for stragglers. It’s not long before Sam finds the mother and daughter hiding, which also means it’s not long before Ghost Gacy slices Sam but good. Cas appears in the nick of time and shoots the clown before healing Sam’s wound. Cas can’t heal the bullet wound Sam acquired when he shot God, however, and on top of that, there’s some “weird energy” in it. This is fine. Everything is fine. After Cas and Sam explain who and what they all are to the scared civilians, the foursome decides now is a good time to go. I’m assuming the mom is searching for the first bottle of chardonnay she can find. Hosting a kid’s birthday party is stressful enough without adding a murderous ghost clown.

Meanwhile, after Dean gets off the phone with Rowena and her exquisite ass, Belphy takes a moment to fanboy over him. He tells Dean that he’s a bit of a celebrity in the hell-circles from his time putting souls on the rack. Dean’s not too big on hearing this– poor guy is terrible at taking compliments.

Belphy tells him that what Dean did wasn’t torture so much as art. Yeesh. Dean asks about the Cage and we learn that yep, it’s open. But as far as anyone knows, Michael is just chillin’ there. Dean tells Belphy that they’ll get a human heart for his spell at the morgue, but the demon informs him that fresh is always best, and whaddaya know?? The poor sheriff just got killed by the Woman in White! She remembers Dean and beats him up a little bit while Belphy snags the heart. It’s a weird time to say I love this character, but I really do. I know he’s bad news, I know he’s just gonna hurt me, but I just can’t help it.

The two start the containment spell, which is great timing, since Sam and Cas are fighting not only Gacy and Bloody Mary, but two other rando ghosts and kinda each other, since Sam accidentally shoots Cas in one of my new favorite Sastiel interactions. The two see the big ass wall whoosh by and decide there is a time to fight, and a time to run. The time when you’re surrounded by grumpy ghosts and without ammo is the time to run. Sam can at least thank Chuck for his long-ass legs, as the foursome make it to safety in the nick of time.

The team meets up again and crowd into the Impala. After Sam takes the mom and kid (who are named Carla and Isabella, btw) into the high school to which the town’s evacuees were sent, we can see that, though they’re fighting on the same side, things are not forgotten between Cas and Dean. Dean’s still pissed, but also is concerned that Cas is okay. They’re an old married couple and Belphy is the awkward not-friend to both. Belphy is us, basically. Sam returns and the brothers have a nice broment while Dean cleans Sam’s bullet wound. They talk and plan and worry for a minute.  Dean opines that all the good they did may have been for nothing, but Sam tells him that he thinks if they can make it through this, they might actually have a chance to truly be free. The Winchesters against The End of The World? Here we go again. We’ve got work to do.

Okay, I was really nervous about this premiere, and I can’t quite pinpoint why. I’ve been excited to see how this plays out, but I’m not really a fan of “blaze of glory” series finales, so knowing this is ending, and having watched the show so many times, I don’t know. I so, SO don’t want to watch all my faves die, while at the same time, I’m really hoping it all comes together. Being a Supernatural fan is a weird, ulcer-inducing experience. I really did love this premiere, though. It was spooky and dark, the introduction of Belphegor is one I’m really excited about, and it did a pretty good job of setting us up for what’s coming.  PS Alexander Calvert is killing it. And I’m super pumped about Cas being a BAMF again.

Farewells are never a favorite, but I’m hoping for a good one.

What did you think of Back and to the Future? Are you ready to say goodbye one last time?

Review of The Good Doctor Episode 5 – Plus a Medical Recap