More Familiar Faces Return in Outlander’s “Blood of My Blood”

Looks like Murtagh isn’t the only person from Jamie’s past who will be making a visit to Fraser’s Ridge!

“Blood of My Blood” opens with Jamie sawing some wood, which is a sight Lord John appreciates when he comes to visit his old prisoner/friend. John tells Jamie that Jamie’s letter induced him to come, and hey, he was in the neighborhood, anyway, having business in Virginia. I mean North Carolina and Virginia are basically the same state, right? John isn’t alone, either, he tells Jamie. Willie (nay, William) is with him, as well.

Meanwhile Claire and Murtagh are chatting by the stream, Claire mostly trying to get Murtagh to stay, when they run into a fancily dressed boy, covered in leeches. Claire, never being one to waste a good find, keeps the bloodsuckers and brings the boy to her house. It may not shock you to learn that the boy is Willie, and that Murtagh isn’t exactly thrilled to be hanging out with his former warden. It’s a tad awkward to say the least, but John and William are invited to stay for a few days.

Dinner starts off alright-ish, but when John starts talking about Tryon’s new palace, Murtagh can’t bite his tongue and the two get into an argument about the Regulators and taxes and I feel like I’m back at my most recent family reunion. Murtagh leaves dinner, and later Jamie takes a scandalized William to the privy (I mean, Good God, can’t they shit in a fancy bowl like normal people?!). Once Jamie speaks Gaelic to the horses, William remembers Mac the stablehand, and asks why Jamie didn’t remind him that they knew each other, to which Jamie has no answer.

Later, Jamie and Murtagh talk about what happened at dinner, and if there is one thing I’m really looking forward to seeing that I didn’t read in the books it’s this. Considering Murtagh’s fate in the book series, the whole idea of what Jamie’s godfather and partner in battle would think of “Red Jamie” seemingly loyal to the British governor and even forming a deep friendship with a Redcoat is a recipe for friction and conflict I am ready to devour. Eventually it comes out that William is Jamie’s son, and Murtagh understands better. Not completely, and there is still tension between the two men, but better. Jamie goes inside for chess and conversation with John while Murtagh makes himself scarce.

The next morning John and Willie are getting ready to go, but John is clearly ill. Turns out they traveled through Cross Creek on their journey and John contracted the measles. Everyone but William has had it before, so Jamie decides to take William on a tour of Fraser’s Ridge in order to protect him. Claire tells him six days should suffice; by then either John will be better or dead.

William is a reluctant camper, to say the least, but Jamie shows him the boundary lines and tells him of their Cherokee neighbors. The two fish and Jamie shows off his “fish tickling” skills. William is clearly still keeping his distance, but it’s both heartbreaking and wonderful to see Jamie with his son. I’ve talked many times before about Jamie, a man who was meant to be a father, never being able to be one to any of his children, simply being forced to trust that the men who are raising them are doing it well and with love, but seeing him with the son he can’t claim and Sam Heughan’s quiet moments of unconditional, but hidden love, really drives it home. It’s wonderful that he has this chance of an adventure with his son, and teaching a young Earl to hunt and dress a deer is certainly an adventure, but at the end of the day, William just wants to be with his dad. The boy is terribly homesick and worried that John will die (and can you blame him? Three of his “parents” already have).

While Jamie and William are camping, Claire and John are having a whole other kind of adventure. The kind that involves high fevers and brutal honesty. If Jamie and Murtagh’s relationship is the unexpected treat of a divergence from the books, then Claire and John’s is the complex, not-friends-but-both-love-the-same-man-and-have-a-wary-respect-for-each-other relationship I savored in the books. Neither knows everything about the other (obviously) or the other’s time with Jamie, but both are at once fiercely possessive of his time and attention and completely understanding where they stand. John knows and is resigned to the fact that he and Jamie will never be a thing, but at the same time, feels he needs to “have” something over Claire: i.e. raising his son. Claire clearly has nothing to worry about as far as competition goes (Jamie is obviously not running away with John), but still needs to point out that she, too, raised Jamie’s child. Alone. Because Jamie was rotting in prison with John. And all the while, Claire is doing her damnedest to save John’s life while John confesses his darkest truths to her: He felt nothing when his wife, Isobel, died, and came to Fraser’s Ridge to see if he could still feel anything at all (spoilers: he can). He tells Claire that he could have had Jamie if he wanted, in exchange for raising William, but that he could never bring himself to do such a thing. These two are very clearly not friends (we’ve known that since they met in Season Three), but they’re also the only two people who seem to understand what it is to love James Fraser, and to raise his child, without him or the hope of having him, and it makes for such an interesting relationship that I, for one, can’t wait to explore more.

Back at Camp Even Too Rustic For Me: Jamie awakens to find the fire out and William gone. Jamie follows his tracks (stealth is not something the Nobility cared much for) to a nearby stream, which is on the other side of the Fraser/Cherokee border. Jamie, having stressed the importance of respecting said border, calls WIlliam back, only to see that William “found” a speared fish. Sigh. He convinces William to come back, but before he can, a group of Cherokee men show up. I would love to tell you who they are, or what their relation to the other Natives we’ve seen is, but I can’t, since Adawehi is the only Native who has been given a name, or any real depth/development, and she’s now dead. It is a glaring failure in an otherwise exciting season. Don’t get me wrong, I love and think it’s important that Outlander hired First Nation actors to play Native roles, but what I would love even more than that is if the characters they played got to be fully fleshed out characters rather than background or fodder to further Claire and Jamie’s stories. 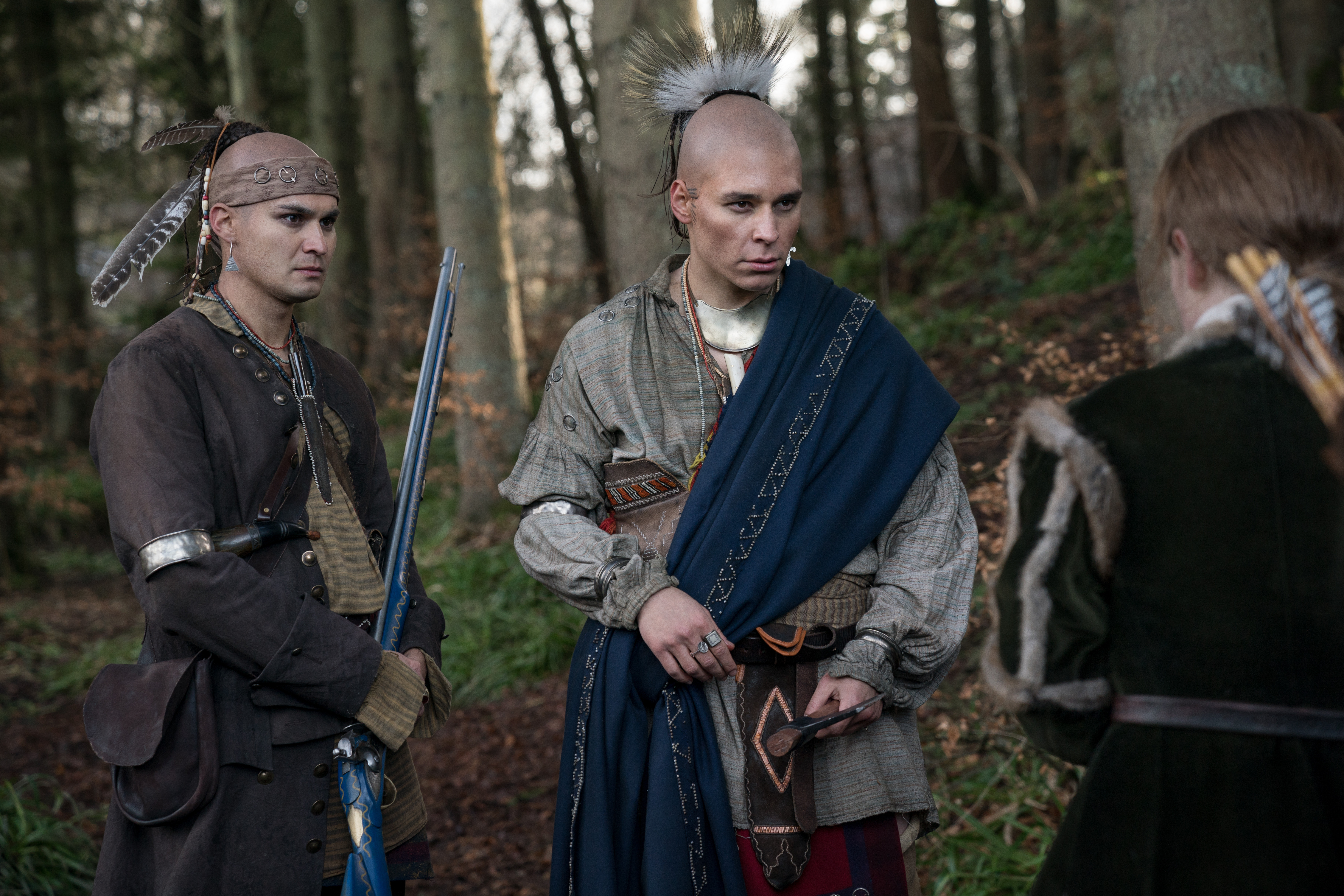 The Cherokee tell Jamie and William that since William has stolen from their land, the boy must pay recompense with blood. Jamie, being both human and William’s father, yells that William is blood of his blood, therefore the payment can be taken from him. He tells William to follow the stream home and says a quick prayer that the Lord watch over Claire and the children. As the Cherokee leader is about to exact his price, William, clearly his father’s son, throws himself in front of Jamie, tells them he’s not Jamie’s son, he was warned about the boundaries and didn’t listen, and that the blood debt is his. The leader then nicks Williams hand and in so many words tells them to get back on their side of the border. William hugs Jamie and the two head back to the house (for some reason on one horse now. I’m going to assume William was too scared to ride his own horse).

When they return, it’s to see a recovering John and an exhausted Claire. Later John and William get ready to leave, and John gives Jamie is chess set. I mean, Claire saved your life but sure give Jamie a gift… (just kidding). As the two leave, William looks back at Jamie. Something he had confessed to Jamie was that it had hurt him before, when Jamie left: he hadn’t even look back.

Finally Jamie and Claire have the house to themselves, and Claire takes a well earned (and let’s face it, probably well needed) bath. They have some sexytimes, and Jamie gives Claire a new wedding ring. Back in season one, there was a bit of an upset among fans that the ring Jamie gave her was significantly different than that of the books. Well, fear not, nitpickers! The new ring Jamie gives Claire is the one from the books, thistles and all! It’s a sweet moment (and a nice nod to book fans), and then the two do what they love best: each other.

I really loved this episode, mainly because we got to see Jamie being a father and spending time with his son. Sam Heughan doesn’t get nearly enough credit for the work and nuance he brings to this role, and I think his talent shines through here. I cannot wait to see the tensions rack up between Tryon and the Regulators in general, and Jamie and Murtagh in particular.

What were your thoughts on Blood of My Blood?

Young Sheldon – A Crisis of Faith and Octopus Aliens Review

Calling all Doctor Who Fans!