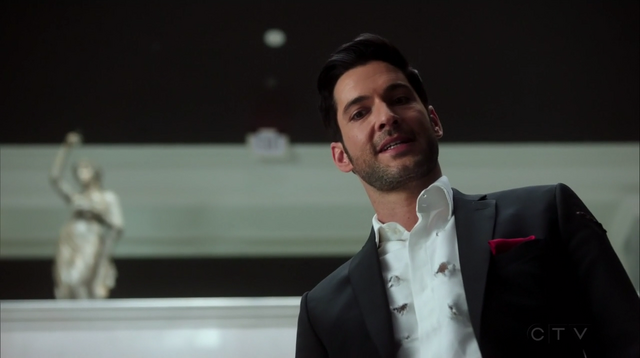 “Stunned by a recent death, Chloe, Lucifer and the rest of the team decide to join forces in order to find out who the killer is and take them down.” – Fox

I write this post with a heavy heart, I just watched a new episode of Lucifer for the last time. I hope that another network picks it up because I am certainly not down with Lucifer but I don’t want to get my hopes or anyone else’s hopes up. Don’t stop pushing for it on social media, #SaveLucifer.

The season finale and possible series finale opens with Decker, Lucifer, Ella and Dan working Charlotte’s crime scene. I’m shocked that considering how close all of them were they are working the case, but hey whatever, they’re grieving.

Ella has been unable to find an evidence, not surprised considering that Pierce wasn’t very close when he shot plus it’s not like he is stupid. Oh, speak of the devil and I’m not talking about Lucifer, Pierce has decided to pop into the crime scene and take charge. Pierce gives a rally speech, dishes out orders and sends Dan home to grieve. Once everyone is on task, Pierce grabs Lucifer for a quick sidebar. Pierce is looking for Amenadiel, Lucifer hasn’t seen him but he does share with Pierce the feather he found. Amenadiel is home, Pierce is relived he has one less person to worry about.

At home it’s clear Dan is in pain. His grieving takes a turn in a physical direction, he destroys much of the apartment but on the bright side the destruction leads him to find Charlotte’s file on Pierce. Dan’s got himself a suspect.

Pierce is using his Sinnerman connections to help cover up the murder and hold Maze hostage or rather they were holding her hostage until she gained consciousness. Maze beat down 12 guys and ran 4 miles to Linda’s.

At the police station, Dan brings Decker and Lucifer into his investigation of Pierce and the file. Dan thinks Pierce killed Charlotte and that he is the Sinnerman. Lucifer confirms his identity as the Sinnerman. Decker isn’t really buying into it. Pierce interrupts with a station wide meeting. He cries literally and metaphorically for justice. Now Decker knows he is lying, Pierce never cries. Pierce killed Charlotte. It’s kind of wild that Decker is so accepting of him being a killer considering she was going to marry him like a week ago, it’s all true but still.

The plan to take down Pierce is in effect. Lucifer keeps trying to tell everyone who Pierce is but Decker keeps telling him to stop with the metaphors. Ella has found evidence at the crime scene. It three different sweepings but they finally found something, I wonder why? The evidence leads to a criminal Charlotte was prosecuting. This guy is clearly a fall guy, they need to find him and get him to flip on Pierce.

Of course, the guy denies committing the murder and they agree with him which seems to throw him off even more. He is shocked when they find the murder weapon in his desk drawer, they aren’t it was planted but by who? It could be anyone his having a rather large get together and everyone there is guilty. And if they are all guilty that means they aren’t guilty of the framing. If Pierce is using his Sinnerman connections to do this they need to find someone who is “innocent.” It’s the driver, he wasn’t much help though he only had a burner phone and never actually met with the Sinnerman. Dan, Decker and Lucifer need help, Ella to be exact.

Dan asks Ella very sketchily to check out the phone and keep it a secret. Ella’s too much of a goody goody and she snitches out Dan, she thinks she’s doing what’s right but she is not. Pierce now knows Dan’s at to him and uses his connections to get some to take care of Dan. Psych! That was plan all along. Decker and Dan bust the dude as he attempts to kill Dan. While Decker and Dan are taking care of that Lucifer goes to talk to Pierce. Cain confesses everything except the part where he was going to frame Lucifer for Amenadiel’s murder. He’s confession doesn’t make it any better, Lucifer is going to take care of him and Pierce can’t do anything with Decker away Lucifer is at full power. Pierce does do something though, he calls in all the cops and says Lucifer was trying to hurt him, they escort him out. Technically he wasn’t lying.

Back at Lucifer’s Team Bust Pierce rendezvous including new team member Ella. Apparently interrogating Pierce was not of the plan, he was just supposed to distract him.  With Pierce on the move now, Decker calls him trying to play good cop. Pierce isn’t believing it one bit and is now on to all of them. He tells Decker he is doing all of this to stay alive for her. She tells him if he really cared he’d turn himself in. Oh yeah and they have a guy tied up on the couch. Pierce is threatening the man’s sister. He won’t talk unless he knows she is safe. Easy peasy, Decker and Lucifer go to collect the sister and prove she is safe.

So maybe all this was part of Pierce’s plan because that guy doesn’t have a sister. Lucifer and Decker are surrounded by guys with guns and Pierce. Pierce wants no harm to come to Decker but Lucifer’s got to go. Pierce will always be on the run with Lucifer alive. Decker’s not leaving Lucifer and she shoots him. One of Pierce’s guys shoots her. Pierce tells his men to finish it. Lucifer uses his wings as an umbrella to cover himself and Decker from the lead storm. Once the shooting subsides Lucifer flies himself and Decker to the roof.

Now that Decker is safe it is time it is time for the Devil to have his revenge. With blood stained wings Lucifer unleashes hell on Pierce and his men. 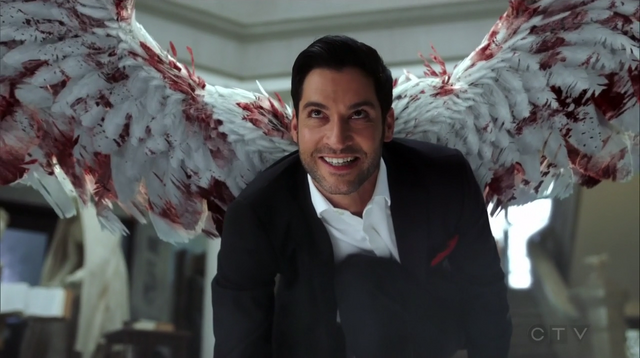 It’s just Lucifer and Pierce left standing. Pierce tries to shoot Lucifer, but Decker is far away enough that nothing can hurt Lucifer. Well not nothing, Maze’s blade could and Pierce happens to have it. It’s a fair fight. After a few moments Lucifer gets the upper and reverses the blade on Pierce as he says, “I promised you, I’d find a way to kill you.”

Pierce thinks he is going to heaven because he has no guilt. Lucifer reminds him that he is a monster and he killed Charlotte. Pierce laughs and tells Lucifer he is a monster too and dies.

Chloe heard the gun shots and came to check on Lucifer. He turns around and Decker and us see Lucifer’s devil face. The episode ends with Decker saying, “It’s all true.” 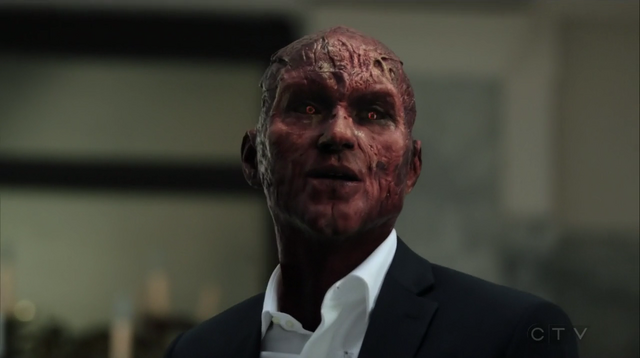 Well it’s been a good run. This show has been fantastic, every season got better and better. I’d love to see the aftermath of what just happened but if we don’t this wasn’t the worst place to end on at least Decker finally knows about Lucifer. Here’s hoping this is just a season finale but if not, it’s been real and stay devilish.

Better Call Saul Hiatus Got You Down?