At last the conclusion to “Deathstroke Returns” is upon us. As always spoilers ahead, kid.

“Promises Kept” picks right up where last week left us with Oliver eavesdropping on Slade’s son revealing his leadership of the Jackals. Joe’s thinking about killing Slade but Slade wants in. Slade’s a bit heartfelt with it and Joe opts to not kill him.

Flashback 7 years ago, A.S.I.S. Medical Ward. Slade is in bed sleeping with his head bandaged up. He is dreaming of Lian Yu until Joe wakes him up. Slade had washed up on the Pilipino coast muttering the name Oliver. He promises to never leave Joe again, evidently, he did or we wouldn’t be in this current predicament. 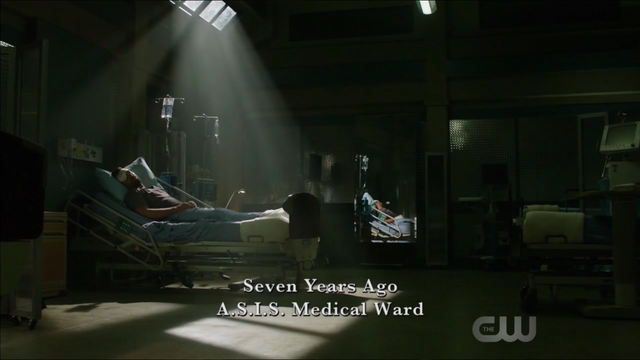 Now in the present day we catch up with the new Green Arrow, John Diggle. Wild Dog, Terrific and the Green Arrow are in the midst of thwarting a robbery. Everyone is kicking ass but when John takes aim his tremor is back, uh oh. John’s tremor leads to the bad guys getting away with a military grade 3D printer. There’s a new player in town going by the name of the Dragon.

At the Diggle residence John and Lyla get intimate. Just before bed John gets a text from an unknown number saying, “no more this week” as he is about to use his last vile of tremor removing medicine.

Oliver catches up with Slade and Slade repeatedly tells Oliver to go home. Oliver can’t leave Slade, this isn’t something he can walk away from.

Time for a little father son bonding. The Jackals are going to steal some explosives from the Kasnian army. It appears that Slade and Oliver are two timing the Jackals. Oliver plans to find the receiver for explosives and corrupt it rendering the detonator useless. Slade believes it to be in Nylander’s gear.

6 years ago, A.S.I.S. Training Facility. Slade’s rocking the eye patch and sparring with Joe. It’s been one year since they found Slade. Joe reveals the prototype Deathstroke suit. Back to sparring and Slade can’t stop thinking about Oliver and accidentally hurts Joe. Slade’s clearly unstable and the fact that Shado shows up next proves that. 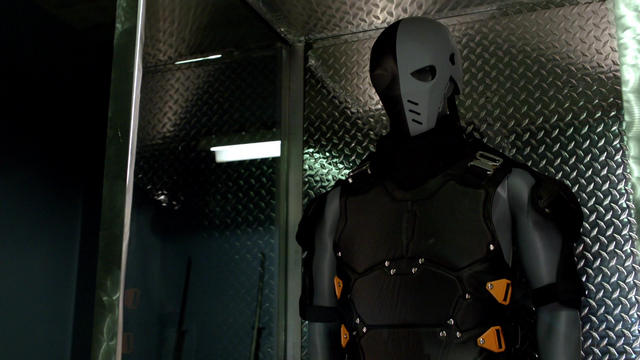 John’s at the lab where his drugs come from and meets the man behind it all, Ricardo Diaz. Apparently, they are looking for FDA approval, I find that hard to believe. But John’s getting hooked up so I guess that’s good.

Back to the Wilson family. The Jackals and Deathstroke make their attack. Slade goes with a none lethal approach but the Jackal’s don’t leave witnesses and Joe kills everyone. Meanwhile Oliver is at the Jackal den searching for the receiver. Ollie subdues two of the Jackals and finds the receiver but not before Nylander spies him from a far.

The Dragon’s next strike is at Palmer tech, Team Arrow is on it. There’s action. John uses a trick arrow. Ricardo Diaz is one of the guys maybe the Dragon and they get away.

Diaz is in fact the Dragon and he has quite the extensive criminal record. He was facing life without parole until the supreme court over turned his case due to technicalities. Diaz used to run with the Scorpions in the Glades. Everything Diaz has been stealing can be used to make designer drugs. John and the team are all in on taking him down.

Back at the Den, Joe calls out Slade, saying that most of his men believe Slade joined under false pretenses. But Joe says he trust him and because of that he has gotten Slade a gift, Oliver. Nylander caught Oliver and now Slade can collect on the debt Oliver owes him. Slade plays it cool and punches Oliver.  “An eye for an eye.” – Joe

5 years ago, A.S.I.S. Training Facility. Slade’s still training and still seeing Shado. She wants Slade to get revenge on Oliver. Then Shado provokes Slade to go berserk and I’m guessing he killed everyone there and stole the suit.

John’s coming clean to Lyla about the tremor. He’s been using an experimental steroid. Now knowing the steroid is tied to criminal activity Diggle wants to know if A.R.G.U.S. has anything that can help him. Lyla is disappointed that John is still using and with the fact the John has no attentions of taking his dealer off the streets until he finds another fix.

Slade is making his promise to Shado and Joe come true. Oliver is tied to a chair with Slade threatening him with Joe goading Slade on and even threatening William. 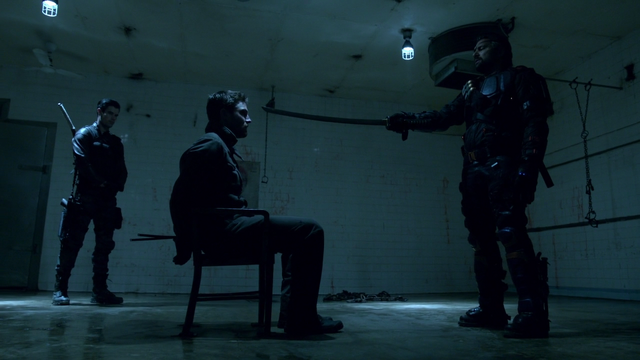 It looks like Slade may stab Oliver but then he cuts the zip tie and Oliver gets loose. A fight with Joe ensues.

With Joe subdued, Deathstroke and the former Green Arrow make their escape.

Joe stops his men from going after them. He is anticipating Slade and Oliver trying to stop them and he plans to kill his father then, probably Oliver too.

The Jackals plan to attack the water supply. Slade admits to Oliver he was tempted to kill him but when Oliver mentioned William, Slade realized that Joe isn’t his son anymore, he is Kane. Slade worries there is only one way to stop him, killing him. Slade broke the promise to his son that he would never leave and he doesn’t think he can redeem him after breaking the promise.

Another flashback and as predicted Slade killed everyone. Joe arrives and tries to stop him but the Mirakuru cause Slade to attack him as well.

Team Arrow is hard at work looking for the location of the Dragon. John strolls in saying he got it, gee I wonder where that came from.

In the Dragon’s lab, they are preparing for the arrival of Team Arrow but they were too late. Instead of having anything confiscated the Dragon blows the building up much to John’s dismay.

The Jackals are making their move with the explosives. Joe stays behind and waits for Slade. Ollie handles the rest. Slade tries to reason with Joe but it turns to a sword fight. Oliver kicks some Jackal ass. My words really aren’t doing justice. During their fight Joe reveals to Slade he saw him kill that man camping. He also reveals that he had a brother his mother didn’t want named Grant. He also slit someone’s throat because he wanted to be like his father, Deathstroke. Slade drops to his knee and says he isn’t Deathstroke anymore. If he isn’t Deathstroke then he isn’t Kane’s father. Kane means to deliver a final blow to Slade but Ollie shoots the sword out his hand at the last minute. Kane drops a grenade and makes his escape but not before telling Slade he wished he stayed dead.

Slade and Ollie have a heart to heart. They go their different ways. Slade wants to find his sons.

Another heart to heart but this time it’s John and Lyla.

Ollie’s finally home and catches up with William.

And yet another heart to heart. John finally comes clean to the team about the tremor. Curtis must have been reading my mind. He reminded John he made a chip that allowed Felicity to walk so why hadn’t he gone to Curtis at first. Curtis has got this covered.

Dinah even gets her own heart to heart and vows no more secrets as she holds her gift from vigilante.

Wow this episode blew me away. The best episode of the season by far. Just wow. Everyone needs to watch.

Catch Arrow Thursday nights at 9pm on the CW.

The Fury of Firestorm