Skins fans, where you at? We’ve got something special for you today. An interview with the one, the only, April Pearson. The woman who brought the character of Michelle Richardson to life. The British girl next door. Enjoy!

Skins was considered quite a controversial show back in the day. Did you encounter any words of disapproval, for instance from friends or family?

All my friends and family were very supportive actually, I mean it was weird at first when all the advertising came out, but they were just as excited as we were! We got some disapproval from the media but we knew we were going to be seen as pretty controversial as Skins was the first show of its kind!

Was there a scene in Skins that you didn’t feel comfortable doing at first? If so, which one and why?

Obviously, all the intimate scenes are going to feel uncomfortable initially! Once we had all got to know each other better it was easier, and actually performing those types of scenes is actually so UNsexy!

Where do you see Michelle now, career-wise?

I think she would be living a pretty normal life, maybe setting up a drama school with Sid or Maxxie!

In season 2, Michelle was more defined by her actions and dreams and not by her relationships. And yet, there is a storyline which till this day confuses me a tad, it involves her getting intimate with Sid. I’m not saying this in a “slut-shaming” way. I just feel like it wasn’t the right step for her character’s development. While reading the scripts, what did you think of Michelle’s choices. Did you understand her motivations?

I think when you put both Sid and Michelle’s actions into context it becomes more understandable. In the break between the series, they have been dealing with Tony in a coma. Sid’s best friend and Michelle’s boyfriend. They both love him so much and the idea of losing someone you love is so traumatic that you do gravitate to someone who is going through a similar thing. Sid and Michelle find comfort in each other and that turns into a sexual thing as a way of validating themselves and making themselves feel normal again. It’s not uncommon in the real world, and I think it was a brave decision from the writers, especially with how much love there was for the Sid/Cassie relationship!

I’ve always thought Tony’s behaviour towards Michelle, in season 1, was on the verge of emotional abuse, if not straight up emotional abuse. He was manipulative and conniving. Why was she so hung up on him, in your opinion?

When you are that age, it’s so easy to feel like being loved by the ‘most good looking guy in school’ is what validates you as a person. I think Michelle was just young and impressionable and thought that Tony was the love of her life so took anything that he threw at her. She is very insecure, and needs everyone’s love, which is such a common issue for many people. Her desire for Tony’s love made her forget about her own self-worth.

From all the character arcs, do you have a favourite one? It doesn’t necessarily have to be from your generation.

I love Jal’s character arc. But I think they are all so clever and special in their own way, there wasn’t a single character who got left behind!

If you didn’t play Michelle, which character would you like to portray and why?

OOH good question! Probably Chris. That might be because Joe was so amazing, but I loved his character.

Do you have a favourite tv show right now?

I love Chef’s Table, I love cooking shows. Stranger Things is amazing too and I’m enjoying the new series of Broadchurch.

Tell me about your latest projects. What is next for you? 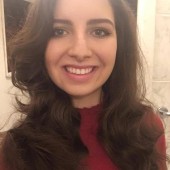