For the first time since Disney’s acquisition of Lucasfilm and Lucasarts, there are no films in the making. Nothing announced, nothing to look forward to viewing on the silver screen. However, we Star Wars fans do have several other important projects to look forward to, namely the plethora of books and comics and a handful of TV shows that will come from that fabled galaxy far far away. This year’s San Diego Comic-Con panel talks about none of the previously announced works and instead focuses on new works! The panel has such authors like Timothy Zahn, Alex Segura, Justina Ireland, George Mann, Preeti Chhibber, Tom Angleberger, Rebecca Roanhorse, Greg Pak, and Alyssa Wong, moderated by This Week In Star Wars host Kristin Baver and Lucasfilm Publishing senior editor Robert Simpson to talk about the exciting printed stories coming to us soon from that galaxy far far away…

Of the many announced projects during this panel, these are the ones I am most excited about:

The new Darth Vader comic series details the period of Vader’s life in between ESB and RoTJ. This is exciting because it’s previously underutilized in modern Star Wars canon, and we will get to see how Vader deals with his rejection by his son, his last (or so he thinks) connection to Padme. Writer Greg Pak is very eager to show us how he digs deep and explores Vader’s character during this time period.

We are also getting a little background on two upcoming short story anthologies, From a Certain Point of View: The Empire Strikes Back and Stories of Light And Dark: Star Wars: The Clone Wars. Each tells the stories we all know and love from the film and television show, but from a different point of view than we know. The anthologies will include stories written by Preeti Chhibber, Tom Angleberger, Rebecca Roanhorse, each from a differing character’s point of view.

Doctor Aphra is back as well! Writer Alyssa Wong really understands the character, giving the Aphra’s future a really bright outlook. She gives a few hints on where she’s taking our favorite space archaeologist and gives a lowdown on Aphra’s new crew. This second volume of comics will be a new start for Aphra, and because Alyssa Wong is a huge horror fan, this series will be heavily influenced by the genre. Aphra’s new adventures will be spooky as hell and it is so exciting to see.

Timothy Zahn has also returned to writing more Admiral Thrawn! I am a huge fan of the original Thrawn trilogy and really enjoyed the recent new canon novel. With this return to form, Zahn should bring the Chiss heat with his new Thrawn Ascendency trilogy. The trilogy will detail the rise to power of the Chiss empire and deal with threats to their power.

Most exciting, however, is the long-awaited look into what the High Republic line of stories will bring. Spearheaded by Justina Ireland, she plans to explore how the force works from a scientific point of view (and the point of view of a twelve-year-old). Despite the fact that this first foray into the High Republic is going to be a kid’s book, I’m hoping for an exciting all-ages exploration into this ignored time period in the franchise.

The future of Star Wars is an exciting trek into uncharted space. With the complete closure of the Skywalker Saga, Lucasfilm could go anywhere. I wish we got a little more info regarding the High Republic Stories, and they truly are, from diving into less-known corners of the existing saga and an exciting branch out into the High Republic waters, fans have plenty to look forward to. Here’s to hoping that the KOTOR games get reintroduced to canon though. 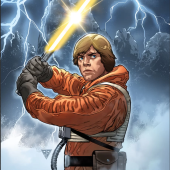 TGON Reads: I Will Judge You By Your Bookshelf