Oliver continues his battle with Cayden James. Dinah and Oliver have a major disagreement that endangers the life of one of their own. – The CW

“All for Nothing” opens with Quentin, Oliver and Dinah meeting with the newly appointed captain of the police department, Captain Hill. They’ve brought in ARGUS to help with the Cayden James problem but they just end up with a bunch of dead agents.

70 million dollars is how much money has been paid to Cayden James. Star City is a day or two from bankruptcy.

Quentin is being followed by Laurel.

Dinah meets with Vigilante, he wants to know if Dinah trusts him. She answers with a passionate kiss. Probably a yes.

Hot damn, a flashback of when Vincent aka Vigilante and Dinah met at Central City PD. From the looks of it Vincent is good at being undercover.

Enter evil bad guy meeting. It’s not said but it’s obvious that the members of Cayden James round table are suspicious of Vigilante.

With Vigilante’s double agent status unknown to Oliver and Diggle they track him and attempt to apprehend him. Curtis and Rene quickly stop what would have been a fight.

Old Team Arrow finally gets to see the New Team Arrow Cave. The Vince situation is discussed. Of course, Old Team Arrow is suspicious. Vince was convincing and now they plan for him to set up a cipher on Cayden’s server and use it to track him like they tracked Prometheus.

Lance and Thea talk about Laurel.

Oliver still isn’t convinced by Vincent and he lets him now.

Teams collide in the original Arrow Cave. All there to coach Vincent on his mission.

Things appear to go south when Cayden catches Vince in the server room. Felicity on the comms gives Vince some tech lingo to impress and distract James with. It worked and Team Arrows have the data. Vince makes a noisy escape when he is potentially made.

Flashbacks of Dinah and Vince continue to parallel the episode.

His escape didn’t work and Anatoly and Cayden nab him.

With Vincent tied up. Cayden bad guy monologues, he comes off pretentious as usual. Apparently, he knew he was double agent considering his previous track record. Vince denies everything of course and Anatoly is tasked with torturing him.

Laurel continues to follow Lance. Thea and Lance set up a sting to talk to Laurel. He shows Laurel his Laurel. It’s all too much for her and she freaks out and runs. Lance is so close in breaking through to her.

Both teams fight. Oliver finds a bomb just not the one he expected, Diggle handles the new situation as Oliver continues the search. Things keep going south. The rescue of Vince was a trap, he didn’t turn his comms on someone else did. Through an elaborate ruse the bomb gets away. Dinah and Vince are stopped by an explosion, Cayden James and Laurel.

Laurel is tasked with testing Vince’s limits. Cayden wants him dead. She canary cries in his ear. Maybe he is dead? Cayden and Laurel leave New Team Arrow to stew in despair. 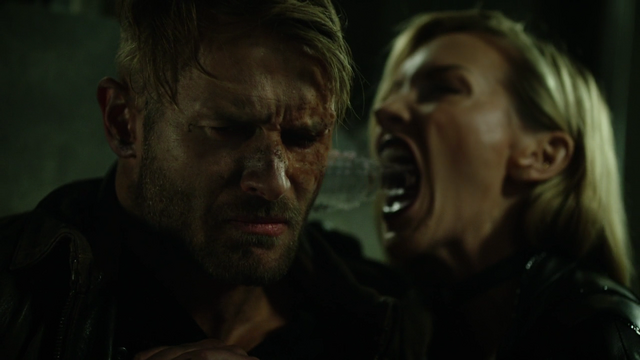 The title of this episode says it all. “All for Nothing,” no bomb and a dead Vince.

On the bright side of things in Cayden’s data they were able to find the footage of Oliver allegedly killing Cayden’s son. It’s a fake of course but it was faked by the same person as the photo of Oliver as the Green Arrow earlier this season. Another traitor is in James’ midst.

Thea and Lance’s Laurel plans are cut short when they find out about her murdering Vince.

Oliver meets with Dinah to give his condolences and to let her know Vince did not die in vain. It means nothing to her and she vows to kill Cayden and company starting with Laurel.

I Am Boba Fett. The Return of the Galaxy’s Best Bounty Hunter