After what felt like a year, Arrow is back baby! Instead of me babbling on, let’s just dive into this episode. In case you forgot, there will be spoilers.

The episode opens with a “Mr. Bertinelli” naming a boat the “Huntress” after his cousin. The boat has something to with making something look legit for the IRS, none of this is probably important. Immediately after Cayden James, Black Siren and Diaz enter his office.

He’s all like “who the hell are you” and they’re like “important, real important.” Jerry Bertinelli is the last of his crime family. So, his deal is claiming boats enter his shipping facility when they don’t actually, crime stuff. The gang wants to buy him out. Like must bad guys he says no and they rough him up and tell him, he has 48 hours to change his mind. Classic bad guy stuff.

In the Arrow Cave, Felicity and Oliver are hanging out team less, with Diggle sidelined. They’ve hit a wall looking for Cayden James.

Curtis is still off the team but he and Felicity are going to fix John.

Curtis and Felicity install a chip in John’s arm but it’s a dud, back to the drawing board.

During the surgery, the trio notices some signal interference. They’ve been bugged.

At the police station, perps are just turning themselves in. They’re presents from Vigilante to Dinah. The presents come with a date for the two former lovers.

Oliver, John and Felicity meet outside to discuss the bug. Lyla is going to let them use ARGUS for their base of operations. An office building’s security system goes down and Oliver is off to do Arrow stuff.

Bertinelli is there waiting for him. He wants help. In exchange Bertinelli gave the Green Arrow security footage from the other night. Felicity got a plate from the footage.

Curtis and Rene meet up. Rene is having some regrets and wants Curtis’s help destroying the digital files of him implicating Oliver so he can recant. Curtis reluctantly agrees.

Vigilante and Dinah catch up at the pier. It looks like their romance could be rekindling. Vigilante is interrupted with a “work” text from an informant.

Thea is back and back in the mayoral office.

Felicity tracked down the plate. Oliver leaps before looking in hopes to catch Cayden James off guard.

Oliver beats up some dudes and puts arrows in them. Oliver actually did take them by surprise. He shoots one guy and gets Black Siren with a choking arrow. Cayden James is the last man standing but he has some t-spheres. Shooting tennis balls has helped because Oliver takes them out with no problem.

Midst talking to Overwatch the comms are dropped. Cayden James calls Oliver, Mr. Queen (I forget if he already knew his identity or not) and Anatoli, Vigilante and Diaz join the party. 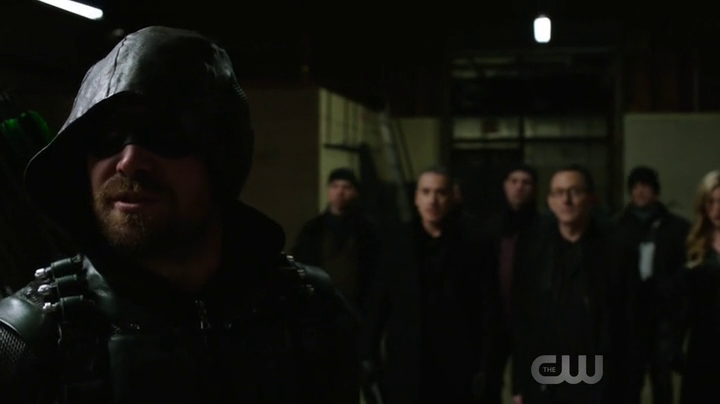 The Green Arrow needs a team if Cayden James has a team. Oliver is not willing to trust any of them but he is willing to share what they know. When the intel about Vigilante is revealed Dinah won’t believe it. Dinah argues and that causes all of them to argue until Dinah walks out.

Bertinelli is in the process of fleeing town when Oliver stops him for a team up to end Cayden James.

Guess Dinah believed them because she meets with Vigilante and attempts to bring him in. He subdues her and gets away.

Diggle isn’t a fan of the Bertinelli team up. He wants the old team back. Dig claims teams and friendships are built with forgiveness and he is right. Oliver isn’t seeing it that way though. He just wants to stop Cayden James and he only needs John and Felicity.

Curtis and Rene are in the process of getting rid of the FBI evidence, unfortunately they have hard copies too. They have a theory that Cayden James leaked Wild Dog’s identity to the FBI. Dinah barges in and tells the two about Vigilante. The three decide to suit up and team up to take down James.

Bertinelli is assembling an army for the port battle. Or maybe that’s just what Oliver and company wanted James to hear.

There is an army but they aren’t exactly as described. Any who they fight for the port. Diggle finally gets back in the game, controlling what look to be t-spheres. Even with Dig’s help team Bertinelli/Arrow are not faring well and Bertinelli is attempting to flee. James catches him and wants him to execute the Arrow. Oliver creates a diversion and escapes, leaving Bertinelli to be killed by James and company.

Back in the cave, Oliver isn’t too happy how everything played out. Oliver wants the team back. Looks like Dig’s talk worked. Curtis, Dinah and Rene don’t want back in, they still don’t trust Oliver, Felicity and John. Before they part, Curtis believes he fixed the chip.

Thea and Lance bond. She gives him more Laurel pictures for his scrapbook. She can relate because of Malcolm.

Curtis adapted the former Helix lab into the new lair for his team.

Catch Arrow on Thursdays at 9pm on the CW.

This One Is For The Screwheads

Paranormal Programs: Shows to Keep You Up At Night