As the title might suggest this episode was the 2nd part of the “Crisis on Earth-X” Arrowverse crossover. I will be writing this post with the assumption that you watched Supergirl which was the the 1st part. If you didn’t watch it you really should go back and watch it or at least read the recap which you can find right here. Seriously though why wouldn’t you watch it? This whole thing was fantastic.

Arrow picks up right where Supergirl left off. The invaders from Earth-X have invaded and fled but they left someone behind, Prometheus. The heroes of the Arrowverse locked him up in one of the metahuman cells in STAR labs.

The episode officially kicks off with Prometheus staring at Oliver, Felicity, Kara, Sara, Barry and Iris. Prometheus removes his mask and Felicity, Oliver and Sara are the only three that gasp or acknowledge the reveal. Everyone else just says “Who’s that?”

It’s Tommy “freaking” Merlyn. Obviously Oliver is taken a back and asks to be alone with him.

The Legends at first think Tommy to be an anachronism but everyone agrees that would make no sense. Barry proposes that he is from another Earth. Harry chimes in and gives everyone the 411 on Earth-X. An Earth where the Nazis won World War 1.

Oliver and Tommy have a heart to heart. Yeah seriously Earth-X Tommy seems to regret his Nazi actions but it’s all he has ever known. Oliver wants to help Tommy. For a moment it seems like Oliver has gotten his Tommy back.

Earth-X Tommy is a Nazi dick. After hearing all Oliver has to offer Tommy calls him a special kind of idiot for believing any of that. He calls Oliver and his world weak. Tommy promises Oliver and everyone he cares about terrible deaths. His final words are “I wish I could live to see it.”

Yes his final words because after all of that he pulls a tooth out of his mouth.Takes what must be a cyanide capsule from it and kills himself. He drops dead.

Oliver-X, Kara-X and Eobard Thawne (wearing Harrison Wells face) get the news of Tommy’s death. Eobard gets a little mouthy and Oliver threatens him. Kara is there to break it up and Eobard is sent on his way to locate the prism (whatever that is.)

Felicity recruits Curtis to help track the invaders. Curtis wants to come help fight but Felicity insists that she needs him at the Arrowcave.

Oliver and Felicity have an awkward conversation. On Supergirl Oliver asked Felicity to marry him and she declined much to Oliver’s dismay. She tells Oliver she loves him but she just doesn’t want to be married.

Next Stein and Jax have an awkward conversation. Stein is planning to retire from the Legends and Jax is going to miss him, I would too. Stein is the closest thing Jax has to a dad.

Whoa another awkward conversation. Sara and Alex hooked up on Supergirl and this is the first time talking since Nazis attacked.

Catching up with Kara, Alex confides in her that she feels like she made a mistake. She doesn’t do one night stands and she’s thinking she made the wrong choice breaking up with Maggie.

Now Felicity and Iris talk about Felicity and Oliver. Thank god they are interrupted by a Nazi break in at Dayton Optical Systems.

Supergirl and Flash arrive on the scene. Oliver arrives moments latter on a motorcycle and reminds them that he does not have super speed.

Finally Green Arrow, Supergirl and the Flash come fave to face with Overgirl, the Reverse Flash and Fuhrer Arrow (I have no idea what he actually goes by.) 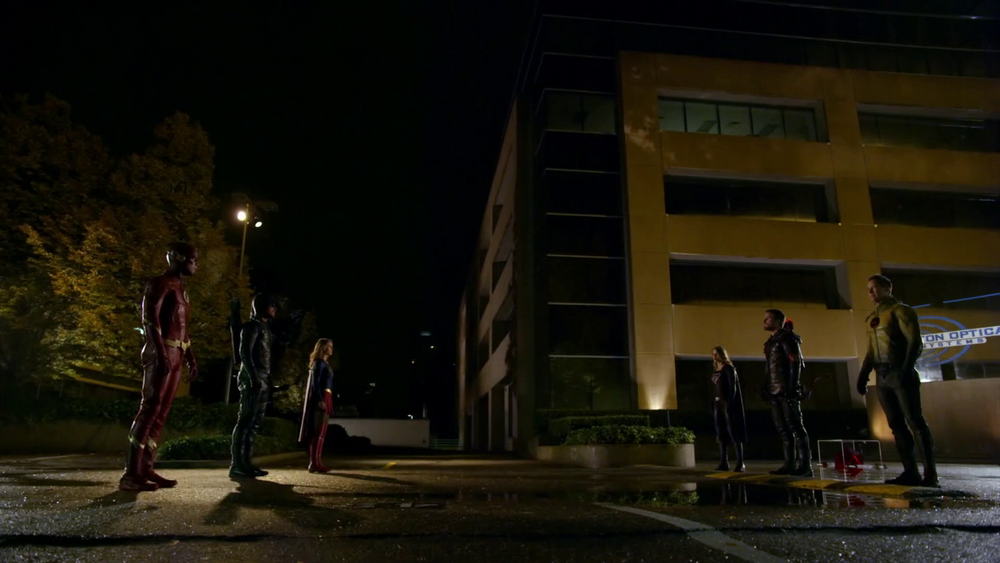 The Earth-Xers stole a red prism.

At this time Overgirl, Fuhrer Arrow and the Reverse Flash reveal their true identities.

It’s interesting to note that Thawne is the Earth-1 Thawne, guess he isn’t dead.

By the way Earth-X Oliver and Kara are married.

They insult each other for a bit and then they fight.

Green Arrow hits Overgirl with a kryptonite arrow. That was real cool. He is basically Batman.

With Overgirl somewhat injured the Earth-Xers make their get away but not before Overgirl hits some construction site with her laser eyes.

With lives endangered the good guys can’t follow after and instead go to save the construction workers.

They save the workers due to their teamwork.

The prism is a sub-light generator. Which can be used to make a neutron bomb. They really need to be able to track the Earth-Xers.

No worries though Oliver’s arrow has Kara’s blood on it and they can use that to track her. Overgirl has a lot of solar radiation in her blood.

Everyone at STAR Labs is trying to come to terms with their situation.

Felicity has finally been able to track down the Xers. Supergirl, White Canary, Firestorm, Alex, the Flash and Green Arrow are going to take the fight to them. There’s a real cool shot of them all looking heroic and walking the halls of STAR Labs.

Just when you thought STAR Labs was left defenseless Mick Rory comes out screaming to Felicity, Caitlin and Iris about the lack of mustard for his sandwich.

The good guys are on the scene and fighting ensues, duh. Overgirl and Reverse Flash are there but Fuhreh Arrow seems to be missing.

He’s at STAR Labs. Thank god Rory is there.

Harry is the first to run into Fuhrer Arrow. Luckily for everyone he hits the alarm before Fuhrer Arrow hits him.

More fighting at the Earth-Xers base. Honestly it actually looks really good. Some real good special effects for TV.

After taking care of them Fuhrer Arrow shouts “Anyone else want to be a hero?”

Mr. Terrific, Black Canary and Wild Dog reveal themselves. A pretty badass intro if I do say so but it gets even better. Mr. Terrific says “they wanted to wait but I didn’t think we’d get a better intro.” I loved it.

Fuhrer Arrow takes them down too.

Meanwhile Green Arrow and company have dispatched the Nazis.

Or so they thought cause Metallo came out of nowhere and blasted Kara. The team is quickly taken down by Overgirl and RF.

Eobard Thawne tries to evil monologue with Barry but Kara-X quickly stops him just before she collapses in the returning Oliver-X’s arms.

Overgirl’s in a lot of pain but from what?

Overgirl has been exposed to too much solar radiation. She needs a new heart. Kara is about to be an organ donor. They stole the prism to duplicate a red sun.

At STAR labs Fuhrer Arrow seemed to have missed Felicity and Iris there. Those two are still roaming the halls. Everyone else has been locked up in the cells and Nazis are a plenty.

Oliver, Stein, Jax, Sara, Alex and Barry wake up in a concentration camp on Earth-X.

Fantastic. I love this crossover stuff it’s like a 4 hour long comic book movie. What’s not to like?

Don’t forget to watch The Flash next or at least read the recap found here on the site.

Catch Arrow back on Thursday at 9pm on the CW.

An Ode To The Summer Binge Part II: Focus On Foreign Dramas