Arrow is officially back with last week’s season premiere and it looks like we have an action packed and entertaining season ahead of us.

Here is everything I recall from the episode. If you could I’d recommend watching the episode, it was quite good. If not here you go and expect spoilers.

Fallout picks up 5 months from the season 5 finale, this episode was action packed and contained many hints of what to expect this season. But I know the first thing everyone wants to know is who made it of the island, so before we get into it here is the list of everyone that we know for a fact made it off Lian Yu.

Now on with it.

This episode kicks of with Team Arrow 5 months later looking for someone named Alex Faust. He is trying to bomb the city but of course Team Arrow saves the day. Diggle, Oliver, Wild Dog and Mr. Terrific are all there. Wild Dog has gotten a sick new suit. A t-sphere is used to relocate the missile from Star City but this sends Oliver into a flashback of the island. 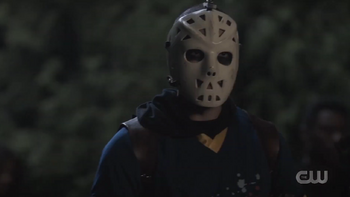 The fate of Felicity is left unknown for a moment but have no fear she comes to the rescue in the Arrow Cave with some Big Belly Burger.

The most beloved Arrow character is back. Raisa the Queen’s housekeeper from season 1. She watches William while Oliver is mayoring and arrowing about. To be honest I totally forgot about her.

William is definitely not a fan of Oliver. Which is totally understandable but the dialogue the kid gets is not so good and sounds like it was written for a 4 year old.

With Faust in custody at the police station Dinah Drake is seen questioning him. But uh oh Quentin Lance is late for a meeting regarding the upcoming police academy graduation. Dinah volunteers to collect him and leaves the most incompetent police officer in charge of watching Faust and getting him a soda.

Dinah finds Lance at a bar but don’t worry he is still on the wagon but it is evident he went through something dramatic on the island.

Officer stupid brings Faust his soda and then watches the dude smash head into a table to knock a tooth out. He then tells Deputy Dumbass that the tooth is a C4 implant yet nothing is done as he drops it in the soda and it fizzes about before exploding.

Black Siren and crew entering the police station, meet up with Faust, kill everyone and blow the place up. Literally all of that could have been avoided if it weren’t for stupidity.

Apparently Quentin and Dinah told everyone Laurel died on Lian Yu. They stick to the story that they found her dead under a bunch of rubble there.

More William Drama. Raisa informs Oliver of his nightmares, something about the “Bad Man.”

Insert flashback, mixed signals about Thea are given. Alive or dead, who knows? (She is in a coma.)

Quentin comes clean to Oliver about Laurel, kind of. Quentin thinks he is the one being targeted but can’t fully explain himself because they are interrupted by a call from ARGUS regarding the whereabouts of Laurel.

This leads to a pretty spectacular fight scene on a bridge. During this fight Diggle is having trouble shooting, he is very shaky and has awful aim. Diggle’s problem leads to Wild Dog falling off the bridge. Don’t worry though Oliver saves him with a rappelling arrow but not before he collapses a lung. He is fine though but he’ll be in the hospital until the end of the episode.

Back in the Arrow Cave, Oliver asks Dinah about Laurel and she sticks to the previous story.

Another flashback to the island. Here we see Thea incapacitated, we are supposed to think she’s dead, she’s not though.

Dinah and John investigate Laurel’s hideout, Dinah calls Diggle out for missing his shot on the bridge. He is very guarded about the whole thing. He questions her about Laurel but they are interrupted by finding a map of City Hall, the location of the police academy graduation.

Flashback to Quentin and Dinah on the island. Laurel is very much alive, until she puts a knife to Dinah’s throat and Quentin shoots her. This is actually broken into two separate flashbacks.

William has a bad dream and tells Oliver he is the bad man. You’ll hear the bad dialogue during this scene.

With the graduation being the target all hands need to be on deck. Curtis luckily has a a t-sphere that can find bombs but him and Felicity need to be at City Hall to control them. Diggle volunteers to stay behind and run the coms, a very out of character move for Diggle. ARGUS and SCPD will be there.

Flashback to Samantha dying in Oliver arms on Lian Yu and making Oliver promise to be William’s father.

The graduation goes off without a hitch and Oliver delivers an awe inspiring speech.

Back at the Arrow Cave, Laurel and company invade. Diggle is unsuccessful in defending the cave with his gun and resorts to using his bare hands. Luckily the rest of Team Arrow intervenes.

Quentin and Laurel have an awkward encountering outside the cave but she does tell him not to torture himself about Lian Yu so that’s kind of nice of her.

Laurel’s plan is still a mystery. The team comes to the conclusion that she stole something from the cave.

Hey Rene is back 30 minutes later. Being the badass he is, he discharges himself from the hospital but that’s all good and Oliver has gotten him a new hearing for the custody of his daughter, Zoey. My heart melts.

And here at the hospital we finally see Thea’s fate, a coma but I already told you that.

And Slade makes a guest appearance. He is heading to Calgary to find his son Joseph. Slade even bestows upon Oliver some fatherly advice, prison really rehabilitated him.

Finally a Diggle flashback. Looks like he was hit by an explosion on the island. He has a nasty scar on his right shoulder. Perhaps that has something to with his gun impotence.

The episode closes with Oliver finally getting William to agree to watch a baseball game with him.

Oh yeah, I almost forgot Oliver Queen is outed as the Green Arrow on the news.

See you next Thursday.

Get Ready to Talk Turkey With These Thanksgiving Day Specials