The Last of Us – Episode 1 Review

HBO’s newest post-apocalyptic drama series is here! And it’s everything we could have hoped for in its premiere. If you aren’t familiar with the world of The Last of Us, take a peek at this breakdown written by our very own Brenda Gabii!

Let’s get straight into it!

The series kicks off in the middle of a talk show segment all the way back in the 60s. A scientist (played by John Hannah) details the catastrophic potential of fungus. To him, the fungus could be worse than anything bacteria or viruses could pose. The writing does a fantastic job of making this plausible by contextualizing global warming for us viewers. Sure, maybe fungus can’t thrive within humans in the current conditions. But what if they were forced to adapt to new environments as a result of global warming?

We’ll let you in on a little secret if you aren’t familiar with the source material. This wasn’t segment wasn’t part of the original video game.

Right off the bat, the series deviates from the video game with a welcome addition. The scene in question is only a few minutes, although it manages to pack a sense of dread and terror. It’s a fungus that’s inevitable and coming soon. And there’s no cure.

Setting up the landscape pre-apocalypse

HBO is never shy to spend some money when it comes to the visuals of its openings. They weren’t stingy here, either. The opening cinematic is beautifully paired with a rework of the video game’s original theme composed by Gustavo Santaolalla.

Much of the first half stays faithful to the game with its content. However, Joel and his daughter Sarah have an extra special conversation and plan the festivities. It’s Joel’s birthday! What could go awry?

Before long, it’s time for Sarah to go to school. But today, her head is in the clouds as she plans a trip downtown to fix her father’s broken watch. (That’s probably why she didn’t notice her classmate twitching.)

When Sarah finally makes it to the jewelry shop, she’s quickly rushed away by the owner’s daughter and advised to go home. Sarah steps out in a state of confusion as ambulances quickly pass by.

Sarah managed to return home safely and enjoy the hours available with her father. All things considered, she’s at peace and comfy enough to nap on her daddy’s lap.

It’s not long before Joel receives a call from his brother Tommy, who finds himself locked in jail. In Tommy’s defense, he was protecting a waitress from a crazed man. (Hmmmm.) It’s time for Joel to go for a late-night drive and post his brother’s release bond.

Sarah’s awoken from her slumber, alone and in a state of confusion. The rumbles and explosions nearby make their presence known. It’s showtime.

Even if you played the game and knew what was coming, it’s still riveting this time. The tension never lets up. It results from the bone-chilling soundtrack, audio mixing, and camera tilts and pans.

Feel like taking a quick detour and embarking on a nerdy lesson? Then, check out this brief guide at StudioBinder and see how camera movements add meaning to films and television!

The cast is quick to display their artistic range as they perform their hearts out as they navigate the initial moments of the outbreak. Unfortunately for Joel, giving everything to save his daughter was still insufficient. Joel and the audience say a premature goodbye to Sarah, who falls to her wounds.

Like the video game, the series undergoes a 20-year time jump. We’re introduced to a different Joel. One lives in the remnants of a Boston quarantine zone controlled by what’s left of the US government.

A grieving Joel does his best to get by in a world turned on its head. Working jobs of all caliber, benign and sketchy in nature, he comes across his latest task through his friend (lover?) Tess. It’s a routine smuggling run.

At the order of Marlene, leader of the Firefly resistance, get a young girl, Ellie, out of the city. What could be so special about her? Maybe it’s the bite mark on Ellie’s arm revealed that seemed to have healed without infecting her? Could this be a different kind of mission after all? Maybe there is hope for the future.

But as the show constantly showed the audience, there are worse things than the infected out there. So, in a brilliant debut that brims with potential, stemming from creative direction and multi-layered characters, we are sold. 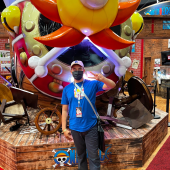 Father and Son Team up to Create Ethan “The Explorer: The Game”