For PC users, there isn’t really much of a choice when it comes to new and nostalgia-evoking cartoon racing games. Mario Kart 8 (Nintendo Switch, Wii U) and Crash Team Racing Nitro Fuel (Xbox One, PS4, Nintendo Switch) are off the platform’s table and Team Sonic Racing is… Meh? Obviously, I’m being biased.

No shit, Sherlock, right? A sequel is supposed to be an improvement. Are they always though?

I’ll break it all down below so you can make your own decision.

Let me start by saying this: This game is utter chaos, especially on the highest difficulty and I freaking love it. I’m not talking about the arena game mode here, where your sole purpose is to hold a spatula — you read that correctly — for fifteen seconds to win while everyone else is gunning for your head like you’re a witch in the 1600s.

This artistic chaos is due to the crew pit feature; its most noticeable difference from the previous game and other similar games for that matter.

The pit crew consists of:

The Two crew members’ abilities are where chaos reigns. There are three types: Support, Defense, and Attack.

There are seventy crew pit members in total, most of them need to be unlocked: twenty Chiefs, and fifty crew members.

This game’s predecessor had only twelve characters…

Twelve… Characters. Of all the Nickelodeon familiar faces. I can name 50 off the top of my head.

Thankfully, the developers used the constructive hate (trust me, fans made it loud and clear) and expanded from twelve to thirty: sixteen initial drivers and fourteen to be unlocked (eight from Grand Prix Cups and six from Challenges).

Here’s the list of characters by their corresponding cartoon:

Each character comes with its own stats (Top speed, Nitro, Steering, and Drift).

These stats can be boosted or altered altogether in the kart customization menu. At first, you will only start with a few options. However, once you play for a while, you will accumulate slime coins. Those allow you to buy further customization options such as engines, wheels, and paint jobs from the garage.

The Rest Of The Features

Nickelodeon Kart Racers 2 offers eight Grand Prix Cups, seven of which have four different tracks. The last Cup has four of the previous cup’s tracks. So, in total there are twenty-eight tracks.

Aside from cups and regular races, you can play finish the Challenges mode, improve your best score in Time Challenge, or go full-on mayhem in the Arena.

Speaking of the Arena, there are two game modes:

Another upgrade from the god-awful previous installment is that you can play online, with strangers (the type threatens to t-bag your ex-girlfriend’s oldest second cousin removed). If that’s not your thing, you can also play online with your friends, or just invite them over and play together in your room where you can place bets on who’s going to lose.

I would talk more about power-ups but I’ve been traumatized enough from the lock-on footballs and almost-unescapable Shellfishes. On to the game’s limitations.

So far, I’ve had nothing but praise and love for the game. However, it is in a dire need of a few tweaks to get it up to par with Mario Karts 8.

The characters are well-designed and instantly recognizable. The graphics are pretty cool. However, the animations are as dull as Sunday evenings. At best, every character has two repetitive animations and that’s it. Once you hit first place, they’ll initiate and loop one awkward-ending animation.

The other part where the game fell short is in its audio, specifically voice acting. There is none. Sure, the music is cool, even whimsical, but not a single peep from the characters.

Can you really imagine a world where Michelangelo is silent? That’s like sewing Deadpool’s mouth shut (Fluff off X-men Origins Wolverine).

One last remark: Some players have noticed a bit of a slowdown during their gameplay. I haven’t. It can be an issue that the developers have addressed with a patch, or maybe I’m just lucky.

To be honest, I still prefer Mario Karts but mostly for the graphics. Nickelodeon Kart Racers 2 is a lot of fun, even dangerous for the faint of heart of the highest difficulty because it’ll turn the Dalai Lama into a raging A-hole.

It’s a nice change of pace to play with cartoon characters from your childhood and its downsides don’t really take much away from the gameplay experience, especially if you’re competing against your friends.

The game is free on Xbox and is around $20 on PS4 and Nintendo Switch, and $7 on Steam (currently discounted). That’s a steal compared to the $60 for Mario Kart 8. 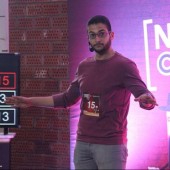