Who Can Play Carnage?

Who can be the counter part to Tom Hardy’s Venom in the upcoming film is a difficult question. Carnage is a crazy psychopath murderer and one of a kind when it comes to villains. Of course Jim Carrey plays a pretty good crazy person and has certain eccentric personality traits that would play out well and has the possibility to be a good psycho murderer, however, could he offer the depth some might want to see in different areas.

There are a couple better choices to go against Tom Hardy and Venom. Michael C. Hall is infamous for his role on Dexter as a serial killer and one that many people love and truly enjoy. He has a lot to offer in the roll of Carnage not only with the experience playing a serial killer prior, but he also has the ability to bring something to Carnage that is needed.

Perhaps he is an underdog to some, but if you have seen Prison Break then you know T-bag who is a tremendously fun psycho to watch and he brings a bone chilling presence to the show. Robert Knepper is fun to watch on screen and has the ability to bring that cold, terrifying, messed up, serial killer mentality. He has brought his dark presence to multiple other shows playing the villain where he also did a good job and is proven to be the actor that could play carnage on a mental level, better than most.

For Carnage to be played correctly, it will be necessary to have someone that perfectly fits into that serial-killer, psychopath mentality. Especially in regards to being up against a strong actor like Tom Hardy.  There are of course a few other people possibly suitable for the roll but these three offer the most fun and possibly are the best suited for the roll, unless of course Leo gets a call and decides to join in seeming he can act in anything, however unlikely. The anticipation for many on Carnage is going to make it necessary that the person plays the roll how it needs to be played. 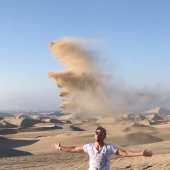 Child’s Play Review: Corporate Greed is Here to Stab You in the Face!

Coming To Sundance Now This July