Hey, fellow Weebs! Welcome to the first ever monthly “Anime Outcasts,” where we highlight some great and not-so-great obscure anime series! We’ll be focusing on the first season of each selected series – from there, and you can decide if you want to watch any subsequent seasons. If you’re anything like me – you’re always looking for a new series to watch (or binge), so I wanted to shed some light on a few lesser-known series that I’ve stumbled upon!

Selector is one of those series that has been burned into my brain since the first time I watched it a few years back. The show follows a group of teen girls as they form a friendship through a new trading card game – Wixoss. However, the show quickly turns dark and thrilling as it’s revealed that Wixoss is no ordinary game. Certain girls are chosen as “Selectors” and can interact with their “Lrig” cards to compete to become an “eternal girl” and have their most desired wish granted. But there’s a catch – you’re only allowed to lose three battles against other Selectors before your power is revoked, and a devastating price is paid *insert threatening music here*.

With a protagonist who has no wish and another whose wish has been labeled taboo, vile, and altogether unnatural, Selector casts bait that’s easy to latch onto. I found myself constantly rooting for these girls to succeed, only to find my jaw on the floor when “becoming an eternal girl” isn’t as magical as it’s been advertised. Nevertheless, if you’re into psychological torment and games becoming too real for comfort – I highly recommend this eight-year-old gem.

The animation is delightful, and I was just as excited about seeing the character designs of every Selector’s Lrig as I was engrossed in the main storyline (seriously, Tama is one of the cutest anime characters across the board, in my opinion). The voice actors are easy on the ears, too, with one even having an almost ASMR quality. Plus, with only two seasons (24 episodes total), it’s a quick commitment that leaves a lasting impression!

In short, if you like dark magic, trading card games, psychological thrillers, taboo wishes, and adorable female characters – Selector is worth checking out! 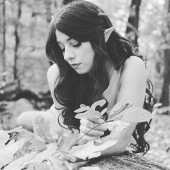