Nicolette Robinson Opens Up in Waitress on Broadway

Last night, September 4th, Nicolette Robinson made her Broadway debut as Jenna Hunterson in the hit musical Waitress. Robinson, the first person of color and the first actual mother to slip into the blue waitress uniform, shined in her first bow at the Brooks Atkinson Theater.

It was announced that Robinson would take over the role on July 25th, 2018, towards the end of Katharine McPhee’s second run. Stephanie Torns played Jenna during the transitional time between McPhee and Robinson. Sara Bareilles also made her Broadway debut as Jenna in mid-2017 and played a second brief run before Katharine McPhee. Robinson is currently slated to play the role only through October 28th, however, an extension is possible; Katharine McPhee extended her run through August 19th once the cancellation news of CBS’ Scorpion broke.

Nicolette Robinson has been in off-Broadway shows Brooklynite and Invisible Thread and starred as Jane for nine episodes of Showtime’s The Affair. In an interview with New York Live Robinson said that she has a strong connection to Waitress as it soothed her through her pregnancy journey. On preparing for the show she said, “My brain is full of… all the things, but it’s glorious.” She also noted how she feels this is a victory for the whole community of color. “It’s important to see yourself on the stage and screen.” Waitress also cast two young actresses of color, Mariam and London, to portray Lulu (Jenna’s daughter).

Robinson with Mariam Bedigian, one of the Lulus. Photo by Walter McBride, BroadwayWorld

Robinson is in good hands during her first stint on the great white way as she’s married to Tony Award Winner Leslie Odom Jr. (Hamilton, Murder on the Orient Express). He tweeted his excitement for his wife as soon as the news was released. “Marvel with me as one of the most soulful and inspiring talents I’ve ever known brings fresh eyes and an open heart to the title role in @WaitressMusical on Broadway.”

Marveling we are, Leslie. Congratulations, Nicolette!

Click through for more pictures of Nicolette Robinson’s journey to Broadway’s Waitress! You can also see her first bow in full here.

Robinson with Mariam and London. Photo from @NicoletteKloe on Instagram.

Robinson smiles in first her bow with Waitress. Photo by Walter McBride, BroadwayWorld.

Robinson’s last run through before taking the stage for her Broadway debut. Photo from @WaitressMusical instagram. 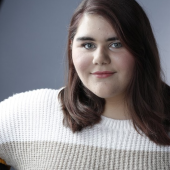 Hamilton Videos to Hold us Over

The Schuyler Sisters Work It!